We held an engagement party 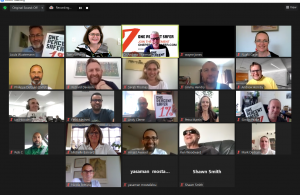 Listening to frontline workers and engaging their knowledge and skills in creating safer workplaces was the theme of our first One Percent Safer community session held at the end of August. The aim of the online session was to gather safety and health practitioners who had expressed an interest in bringing the One Percent Safer principle of marginal gains alive in their workplaces together for an hour to exchange ideas. Twenty-five people from nine countries joined in an exciting discussion about the potential to generate a positive safety culture by tapping into the workforce’s intelligence and experience.

Buy your copy of the One Percent Safer book today!
International shipping and discounts for bulk orders available.

If we all do just one thing, just improve workplace safety by one percent, then that’s 28,000 people that get to go home without harm, instead of ending up dead – each year. 28,000 husbands, wives, partners, mothers, fathers, brothers, sisters, sons, daughters, friends, and co-workers. 28,000 humans.